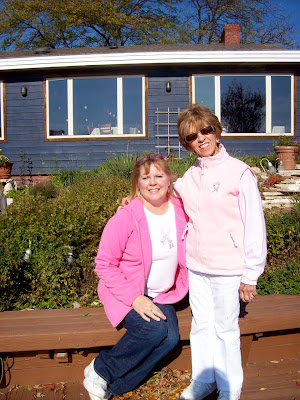 Pat, shown here with ACHT co founder Dee Lynch, stresses the importance of being your own advocate. "You know your body better than anyone, don't be afraid to have that mammogram. Detecting and treating breast cancer early, is key to survival."

In 2009 Antrim County, had the unwelcome distinction of having the highest breast cancer mortality rate in the State of Michigan. Last year that number dropped to 12th in the state and this year, it’s down again, to 33rd. Credit for this decrease in breast cancer deaths, may very well be attributed to the combined efforts of the Health Department of Northwest Michigan, Munson Hospital, and the Antrim County High Tea for Breast Cancer Prevention, an all volunteer, 501c3 organization.


This unique partnership between the public, and private sector, provides uninsured, and under insured Antrim County residents, with free mammograms. It’s driving force, is an extensive education program, which emphasizes, the importance of breast health, and stresses awareness of the importance of early detection, in the prevention of breast cancer deaths.


Within the last 12 months the following three women, had their lives altered forever by breast cancer. All sought and received assistance, from the the Antrim County High Tea for Breast Cancer Prevention.


Pat, underwent surgery for thyroid cancer, while still in her twenties. Eleven years ago, she discovered a lump during her monthly breast exam. When nothing showed up on the mammogram that followed, Pat who was living in the Detroit Metro area at the time, should have been relieved, but she says, “I figured I knew my body, better than anyone, and I knew something wasn’t right, so I got a second opinion.  It’s so very important to be your own advocate. If I hadn’t, gone for that second opinion, I wouldn’t be here today, because an ultrasound revealed not one, but two tumors.” She underwent a mastectomy and reconstructive surgery on her right breast, followed by eight rounds of chemotherapy. The biopsy on the tumors produced surprising and extremely rare results, because each tumor contained a different types of cancer cell. In reality, Pat had been simultaneously stricken with two forms of breast cancer.


Pat moved to Bellaire in 2010. While having her annual mammogram at the Smith Family Breast Center, in Traverse City, this past July, she says, “I knew something was wrong, when the technician came back into the room to take additional views and then told me to sit down, that someone would be in to talk with me.”  Within minutes her worse fears were realized, the biopsy results confirmed that once again, at the age of 55, she had breast cancer.


Pat had implicit faith in the surgeon who had performed her first mastectomy. In September, she traveled down state, where her surgeon performed another mastectomy and reconstruction, of her left breast. According to Pat, ACHT helped with gas cards for her trip there, with lodging for her follow up visit to  the surgeon, and with co pays for medical services and prescriptions. She also has peace of mind, knowing if she needs help with anything, or just needs to talk, someone from ACHT, is only a phone call away.


Over the years, Ila, a 77 year old Mancelona resident, had undergone several breast biopsies, so when another lump appeared she wasn’t overly concerned, because a mammogram taken just six months earlier of the same breast, had been diagnosed as scar tissue from a previous biopsy.


She underwent a biopsy of the lump and a few days later, heard the words, every woman fears. This time, the biopsy results indicated that she had breast cancer. A lumpectomy followed, but when her Oncologist told her she had to undergo 20 radiation treatments, at the Biederman Cancer Treatment Center, in Traverse City, Ila didn’t know what she was going to do. As a senior living on a fixed income, she couldn’t afford the gas for the 77 mile round trip, to Traverse City, each day.


In desperation, she went to the County Building in Bellaire, seeking assistance, only to be informed there were no programs available that could help her. An office clerk there, suggested she contact Antrim County High Tea for Breast Cancer Prevention’s cofounder, Dee Lynch, and gave her the number. Ila says, “When Dee said, they could help me, I was so relieved to know, that someone was concerned about me and really cared. They provided gas for all twenty visits to the treatment center.”


Thanks to early detection, Ila’s cancer is now in remission and says, “I take life, one day at a time. They said they could help me, and they did. I thank God, for those wonderful people. I don’t know what I would have done without their help.”


Last October, 48 year old Tonda, discovered a lump in her breast. With a family history of breast cancer, (her maternal grandmother had it.) Tonda knew she needed a mammogram, but didn’t have the insurance to pay for it. A girlfriend told her, to call Dee Lynch, with the ACHT.


Tonda says, “they were amazing!” In no time at all, the Health Department of Northwest Michigan, saw to it that she had her mammogram, biopsy and a lumpectomy. Five months of chemotherapy followed, then three months of radiation. During this time ACHT provided gas cards for trips to the doctor and treatment facilities.  She, says, “it was really nice knowing I could call ACHT, anytime of the day or night, with questions or concerns.”


Recently, Tonda told her mother, “I’ve lost a year of my life.” Her mother corrected her saying, “No, you have gained the rest of your life.” Tonda recommends that “anyone living in Antrim County, who needs a mammogram and doesn’t have insurance can call the Health Department of Northwest Michigan, at 1-800-432-4121. That call, can save your life.” For information on ACHT, go to www.antrimcountyhightea.org
Posted by Visit Alden! at 9:48 AM 0 comments