A Pear Tree Grows in Alden. 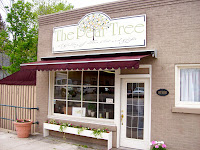 You won't find a partridge in The Pear Tree Gallery, but you will find some beautiful works of art, limited edition prints, and note cards, by watercolorist, Janis Schilling, along with an array of pottery, fiber art, wood products, accents for the home or cottage and ceramics, including a unique, Torch Lake platter and she specializes in custom gift baskets, in a variety of price ranges.

"Jan" as she likes to be called, has been drawing and painting, for as long as she can remember. She credits her mother, with encouraging her, because she matted, framed and proudly displayed her young daughter's art work. As a teenager, Jan's work was sold, at Brownwood, in Central Lake. Today, Jan says, " I occasionally meet someone, who tells me they have one of those original Brownwood paintings. I've offered them a choice of my recent work, in exchange for my childhood paintings, but they don't want to part with them!" Jan graduated from Central Michigan University, with a major in art and completed her graduate work at West Virginia University, where she received her Masters of Art with a major in painting. She went on to teach grades K - 12.

She resides in Ohio, during the winter months, where she has a studio and has been doing art festivals in northern Michigan, during the summer. For several years, she, like many others in this area, was curious about the historic bank building on Torch Lake Drive, with a Gallery sign posted on its facade, that had sat vacant for several years. She had been looking for a location to open her own gallery, when she learned the building was finally available. She feels that the old building, was just waiting for her. 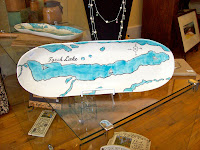 Jan is pleased to offer a line of Raspberry products from her brother's Sandhill Berry Farm, in Pennsylvania. The jams, jellies and sauces have been featured in the William Sonoma Catalogue and served at the White House.
The Pear Tree Gallery, is open during the summer from 10 a.m. to 5 p.m. Jan can be reached at 412-582-2661
Posted by Priscilla of Alden at 9:23 PM