2011 Alden's Memorial Day Parade For Those Who Missed It!

I Love A Parade

Posted by Priscilla of Alden at 12:50 PM 1 comments

A time to remember, Freedom is not Free!

Memorial Day weekend has arrived! It's a time to open up the cabin, plant the garden, take the boat out to the sand bar on Torch Lake, for the first time this season. It's time to gather with family and friends, for some down home grilling. It's also time to remember! Remember, those who made the supreme sacrifice and given all of their tomorrows, that we might enjoy ourselves today! So this weekend, take a moment to remember this:

FREEDOM IS NOT FREE

I watched the flag pass by one day,

It fluttered in the breeze;

A young Marine saluted it,

And then he stood at ease.

I looked at him in uniform,

So young, so tall, so proud;

He'd stand out in any crowd.

Had fallen through the years?

How many died on foreign soil?

How many mothers' tears?

How many pilots' planes shot down

How many died at sea

How many foxholes were soldiers' graves

No, Freedom is not Free.

I heard the sound of Taps one night,

When everything was still;

I listened to the bugler play,hy

And felt a sudden chill;

I wondered just how many times

That Taps had meant "Amen"

When a flag had draped a coffin

Of a brother or a friend;

I thought of all the children,

Of the mothers and the wives,

Of fathers, sons and husbands.

I thought about a graveyard

At the bottom of the sea,

Of unmarked graves in Arlington.

No. Freedom is not Free!
Posted by Priscilla of Alden at 9:42 PM 0 comments

A Facelift for Alden's Harbor 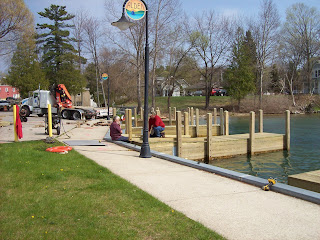 The construction of new floating docks took place this week in Alden's harbor. The new docks, were made possible by a grant, from the Michigan Department of Natural Resources Trust Fund and an "in kind" grant from Helena Township.  The area will be landscaped with the addition of a few trees and shrubs. In addition, of a patio style area, complete with benches, is slated for completion by Memorial Day.
Story & Photo By Priscilla Miller